Growing Green Acres is a business/ministry run by Craig & Milissa Little and our daughter, Grace.  We feel called by God as missionaries to the United States.  The story below documents the birth of Growing Green Acres.

10 Bring the whole tithe into the storehouse, that there may be food in my house. Test me in this,” says the LORD Almighty, “and see if I will not throw open the floodgates of heaven and pour out so much blessing that there will not be room enough to store it. 11 I will prevent pests from devouring your crops, and the vines in your fields will not drop their fruit before it is ripe,” says the LORD Almighty. 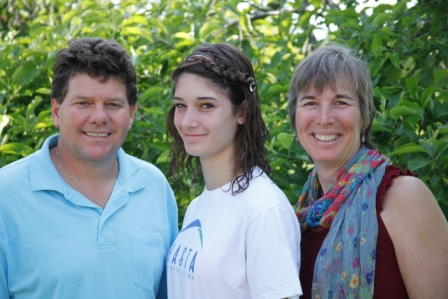 10 and if you spend yourselves in behalf of the hungry
and satisfy the needs of the oppressed,
then your light will rise in the darkness,
and your night will become like the noonday.
11 The LORD will guide you always;
he will satisfy your needs in a sun-scorched land
and will strengthen your frame.
You will be like a well-watered garden,
like a spring whose waters never fail.

Our whole tithe was our house in Fleetwood, NC, in the Blue Ridge Mountains, just outside of Boone.  We prayed, "God, if you sell our house, we'll do it." Despite being a terrible economy and the worst time of year to sell a house (just before the holidays), our house sold in 31 days! In January 2010, we moved to Virginia.

Since then, we have been spending ourselves in behalf of the hungry and teaching others to live healthier.  We believe most people are hungry (and many don't even know it) because they are eating foods that are void of vital nutrients and minerals.  Current farming and gardening practices treat the soil as a growing medium instead of a living organism.  The use of chemical fertilizers, pesticides and herbicides, has killed the soil; tilling has uncovered it and left it vulnerable to the elements.  If we look at God's creation (nature that man has not disturbed), soil is always covered by decaying matter, which in turn feeds the soil.  This produces living microbes empowering the plants to uptake needed minerals from the soil, producing nutrient dense fruits and vegetables with incredible rich flavors as God designed.  Our desire is to teach people to embrace our Creator and honor the land, plants and animals He has provided to sustain us.

Spring has finally arrived, our garden is sprouting, we've had several productive educational workshops, met and ministered to lots of new people and been surprised to find out the farm we are leasing has suddenly sold after six years on the market. So we are on the move....literally.

We will move into a neighbor's basement while Grace finishes the school year and we seek the Lord for direction. Please continue to pray for us during this time of transition. Pray that the Lord will direct us to the right property in His perfect timing.

By faith Abraham, when called to go to a place he would later receive as his inheritance, obeyed and went, even though he did not know where he was going. Hebrews 11:8

And like Abraham, we are walking in faith, even though we do not know where we are going. We believe the Lord has called us to continue the work that we have started here. We will devote ourselves to prayer and missions with the Fredericksburg Prayer Furnace as we look for housing in this area.

We so enjoyed our time at Salem Farm but God has other plans for us and this farm. It's kind of funny, I carry a bag that says "Restoring the earth one farm at a time." I thought we were going to teach others - I didn't think we were going to literally move from farm to farm to bring healing! But I have to say this has been a great adventure!
Photo: Salem Farm in Fredericksburg, VA